“We’ve long been an industry leader in vertical shelving, platform and storage systems for companies like Boeing, DuPont Medical Systems and the Vitamin Shoppe. When COVID-19 hit, we saw a need for a very specialized piece of safety equipment to help workers who were filling so many e-commerce orders at warehouses, distribution and fulfillment centers. We embraced it, and sales have skyrocketed,” says Robert Ammerman, President of Consolidated Storage Companies. 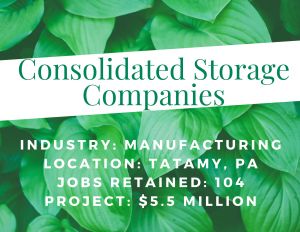 is located in the borough of Tatamy, which has an estimated population of 1,078. Founded in 1907, the company manufactured motorcycle headlights and sidecars, later producing the chassis for Ford’s Model T. But in recent years, there were struggles. Consolidated Storage credits a historically underused loan vehicle offered by the U.S. Small Business Administration with saving the company – and stabilizing it – before the pandemic hit. Consolidated Storage secured the SBA 504 loan with the help of the SBA’s community-based partner Seedcopa.

“A major factor in attaining that loan was the ability to retain 104 jobs in a community that needs companies to pay living wage jobs,” says Seedcopa Managing Director Sherwood Robbins. “When we can help businesses like Consolidated Storage demonstrate value to their communities, it really tells the story of the SBA 504’s economic development impact.”

Consolidated Storage’s Equipto division is now the mastermind behind the Conveyor Crossover, an OSHA and IBC-compliant stairway and platform system that helps warehouse employees safely climb over nonstop conveyor belts as they move purchased items from warehouse shelves to shipping trucks. Major retailers are using the products.

“The conveyors that move these packages are continuous loops. How do you get employees from one side to another, especially if there’s an emergency? We needed to provide a solution at a time when concern was especially high for the well-being and safety of distribution and fulfillment center workers,” Ammerman says.

Ammerman praises Collin Straus, his VP of National Sales, and the sales team for identifying the need and securing buyers at just the right time. He also keeps coming back to the effectiveness of the SBA 504 loan.

“You’re hearing a lot right now about the benefits of SBA 504 loans, with businesses benefitting from months of covered payments. But the SBA 504 saved our business before the pandemic hit,” says Ammerman. 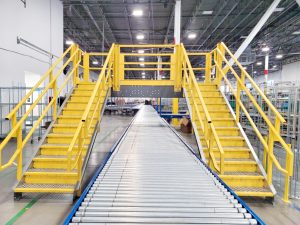 Since the 1970s, Consolidated Storage has occupied a 160,000 square-foot warehouse that it leased from a real estate investor who eventually decided to sell the building. Consolidated Storage was a willing buyer, since the cost of purchasing a new building, renovating it and moving heavy equipment would have been an estimated $7 million.

“How do you run a business while you’re making such a major move? The business wouldn’t have survived, and there were a lot of jobs on the line in a community that really needs companies that can pay a living wage,” says Ammerman.

The company had a rough road to financing. With just weeks to go before they thought they were closing, a financial institution reneged. Ammerman turned to Seedcopa, whom he’d met through the Lehigh Valley Economic Development Corporation.

“The folks at Seedcopa are risk wizards. Sherwood Robbins and Chris McHenry were willing to listen to our story and consider a potential for profitability that other financial institutions wouldn’t. They helped us to find a way,” says Ammerman

Consolidated Storage Companies ended up with a $5.5 million loan, including a $2.2 million SBA 504 portion with Seedcopa at a below-market interest rate. The SBA-backed portion of the loan covers 40 percent, and the bank covers 50 percent. The remaining 10 percent is the small business owner contribution.

“Most of our manufacturing brethren saw at least a 15-20% dip in their business in 2020,” says Ammerman. “At a time when employee health and safety at distribution centers is a major concern, it feels good to know that we are contributing to the solutions. A number of the companies we work with have taken aggressive safety measures that exceed OSHA requirements. Their willingness to invest in their infrastructure is really striking.”