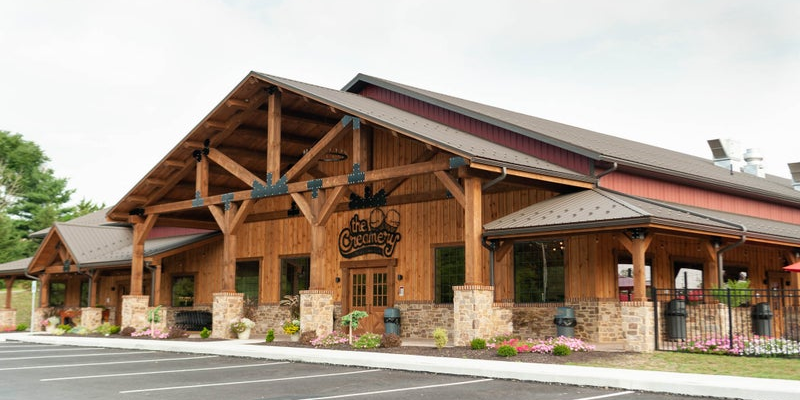 What happens when federal and state loan programs team up? In the case of Plum Creek Farm Market and Creamery, it results in a remarkable building makeover that’s fueling even more growth.

The “before” and “after” pictures say it all. And so does co-owner Keith Zimmerman.

“We started out selling fresh fruits and vegetables in a roadside wagon. Then we opened a 400-square-foot market in a renovated house. Now we occupy about 14,000 square feet of space indoors and out, and we’re still overflowing with customers,” says Keith.

Keith and his wife Kendra began the business by successfully selling produce grown on the nearby farm they own in Bernville, Berks County, Pennsylvania. When customers began requesting they serve ice cream, noting that nobody else in the area offered it, the Zimmermans partnered with Keith’s sister Audrey and her husband Ken to create Plum Creek Farm Market and Creamery.

The road to financing further expansion turned out to be a team effort as well. The Zimmermans initially approached their local bank, Tompkins VIST, to finance the entire loan. While Tompkins VIST wanted to help, they needed assurances to move forward.

“Even though we were growing rapidly, we were a young business and didn’t have a long track record to prove sustainability,” Zimmerman says.

Zimmerman is the first to admit that pairing a bank loan with both federal and state government loan programs takes extra effort.

“You’re getting really low interest rates but you’re also responsible for documenting how the financing is used,” Zimmerman says. “That’s where Marie Shires at Seedcopa was very helpful. While we were still in the planning stages and going through the construction process, she made sure we were providing the level of documentation that would be required at the end.”

Shires, a Vice President at Seedcopa, added, “Working with a borrower as dedicated as the team at Plum Creek definitely assists in coordinating a bank loan, an SBA loan and a PA state loan. Even though this loan combination isn’t for every borrower, the combination of Plum Creek’s creamery and manufacturing arm made this a beneficial loan structure for their business.”

The older, crowded building is gone, and today Plum Creek Farm Market and Creamery occupies a beautiful space that retains the charm of farm living while offering plenty of space for indoor and outdoor ordering as well as dining. In addition, there’s a cozy lounge area, Adirondack chairs outside and an elaborate playground with seating. The number of employees has doubled to 60, with many full time instead of all seasonal. They pulled it all off as the pandemic set in just over a year ago.

“Just because you build a new or larger building doesn’t mean you are going to get more customers. In our case, when we increased our capacity to serve more people, the people came,” says Zimmerman. “God has taken us on an incredible journey from a small roadside wagon to where we are today. It has not always been easy and sometimes it almost took more faith than we could muster, but He has been faithful in so many ways. He’s blessed us with wonderful customers and an amazing team of employees, and we give Him all the praise and honor for the growth and success we’ve experienced!”